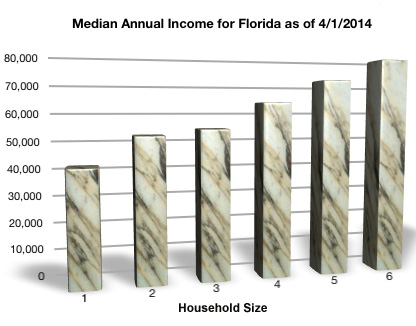 Usually twice per year, the U.S. Trustee's office announces changes in the median income figures used to calculate a debtor's qualification for Chapter 7. New figures have just been announced that will become effective April 1, 2014. For Florida residents, the figures have risen slightly, making it a little easier to qualify for Chapter 7.

Here are the numbers:

Higher numbers are better. Why? Think of the beach limbo dance where contestants have to get under a low bar. The lower the bar is placed, the harder it is to get under. So higher is easier. In this analogy, successfully getting under the bar almost guarantees you will qualify to file Chapter 7. If you can't get under, it gets more difficult to qualify for 7 and your only choice may be Chapter 13. As a result, when the median income figures rise more people can qualify for Chapter 7.

What's odd about the changes this time is that the increases are almost mathematically identical across the board at an increase of 1.46%. Usually there is no discernable pattern. Some numbers go up and some may even go down, depending on the household size. All the numbers are supposed to come from the Census Bureau and be based on actual incomes of families in Florida. This time it looks like someone just came up with a formula and decided on an increase of 1.46% for everyone, so it doesn't look like it was based on actual Florida family household incomes. However, we won't look a gift horse in the mouth. it's good to see a little benefit for everyone.

The next revision of these numbers will likely be announced somewhere around October to November of 2014.