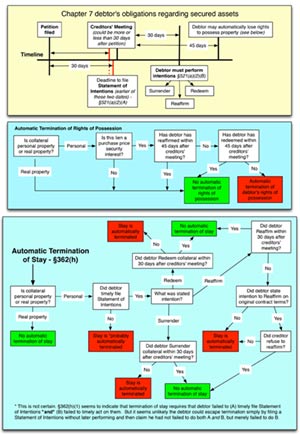 In a Chapter 7 bankruptcy case, the debtor's financial obligations are divided into categories. One of these categories is called secured debt.

What all of these examples have in common is that they involve the concept of security, also known as “collateral.” Collateral is something the creditor can seize and sell if you miss payments. In a secured transaction (unlike a medical bill or an ordinary credit card purchase) the purchaser (you) has signed a contract to buy something, but the contract goes further than a simple promise to make payments on time. Rather, the secured contract provides that if the purchaser fails to pay on time, the lender or seller may seize the item being purchased and forcibly sell it off which will raise some money to help pay down the loan. In these situations, the purchaser is said to have offered security (also known as “collateral”) to back up the loan. These contracts are referred to as secured debts or secured loans.

Making the Right Decision for Your Debt

The Gainesville bankruptcy lawyers at Ruff & Cohen, offer helpful counsel in making decisions regarding your unsecured debts. They give honest advice and explain every possible outcome of your options.

The Process of Reaffirmation, Surrender, or Redemption

Once the debtor files his Statement of Intentions on time, he must act on that stated intention. The deadline to act is 30 days after the date for creditors' meeting. If the collateral is real estate, then there is no automatic penalty.